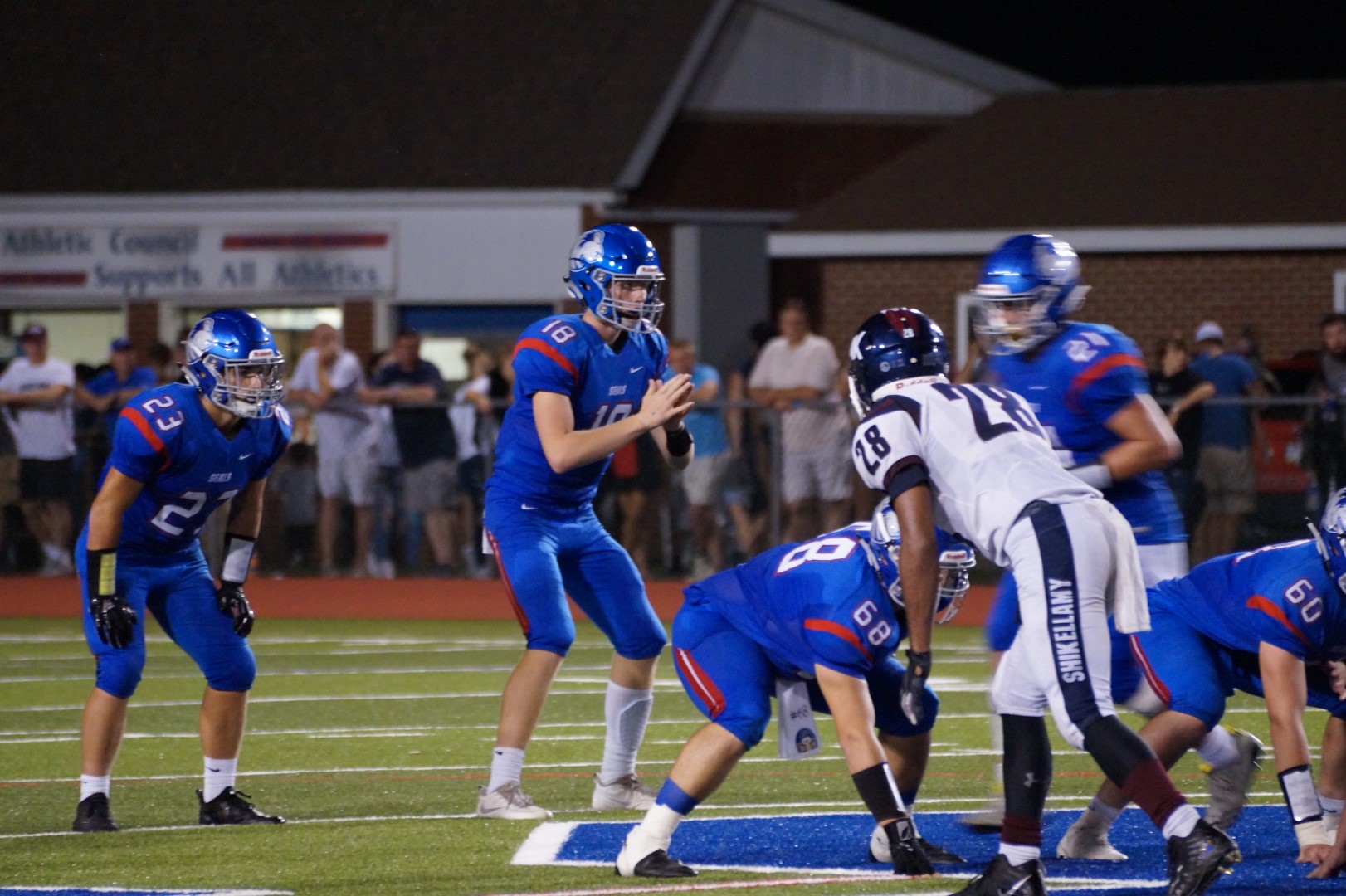 SELINSGROVE — Selinsgrove freshman Danny Shoch generated a lot of buzz before he ever took the field for the Seals.

Some of the plays he produced during Friday night’s Rally in the Valley game with Shikellamy at Harold L. Bolig Memorial Field showed the buzz was deserved.

Shoch threw for 311 yards and two touchdowns on 18-of-21 passing — including a throw back across his body on the move to a wide-open Wyatt Metzger for a 29-yard score — in Selinsgrove’s 35-0 win over Shikellamy in a Heartland Athletic Conference-Division I contest.

It’s the Seals’ first win in the regular season against Shikellamy since 2015.

“I’m a lot more comfortable (tonight) than I was in the first game,” Shoch said. “Our line is starting to come together. We got three linemen back (for this game).”

Metzger had a career game at tight end for the Seals (2-2 overall, 2-1 HAC-I), catching seven balls for 123 yards and a touchdown.

“(Danny) did a nice job,” Selinsgrove coach Derek Hicks said. “Kudos to Wyatt Metzger, too. The radio guys said it’s been a long time since a tight end has been that active in our offense. Nate Schon and Joe (Kahn) did a great job running the ball. We had some good balance. It was nice to finally have all of our linemen and everybody dress for the first time this year.”

“Against the Wing-T, your D-line and your outside linebackers have to penetrate and get into the opposing backfield,” Hicks said. “Blaise had a huge night. I think they said he 12 tackles. For one of our defensive linemen to have double-digit tackles, that’s a huge night.”

Things didn’t get off to a quick start.

Selinsgrove had its first two drives start in Shikellamy territory, one at the Braves’ 19 and the next at the Braves’ 39, but couldn’t come away with points on either drive. The Seals got on the board in the second quarter with a three-play, 83-yard drive. Kahn went 30 yards on a short pass. Schon broke off a 10-yard run, then made a defender miss in the backfield before running 43 yards down the left sideline for a 7-0 lead with 7:37 left in the first half.

Kahn set up the next score, recovering a fumble forced on a sack by Gavin Carroll. The Seals lost 7 yards on the first two plays before Shoch found Metzger for a 35-yard gain. A play later, Schon rumbled 26 yards on a screen pass to set up Shoch’s 2-yard quarterback sneak for a 14-0 lead with 4:02 left in the first half.

Shikellamy (0-4, 0-1) had a chance to get back into the game when Kahn fumbled away the second half kickoff, but the Seals forced a three-and-out. Shoch missed the first drive of the second half with an injury, but returned the field on the second drive of the third quarter. On a first-and-25 after a holding call, Shoch found Ben Swineford streaking down the middle of the field for a 49-yard TD pass and a 21-0 lead with 5:08 left in the third quarter.

The Braves put together their best drive of the game on their next possession, but fumbled the ball away at the end of a 36-yard run. Selinsgrove put together a nine-play, 74-yard drive capped by Shoch’s TD pass to Metzger. Shoch was flushed from the pocket, rolling to his left. He saw Metzger slip behind the defense and launched a rocket to the junior tight end all alone in the end zone for a 28-0 lead at the end of the third.

“We had Wyatt and Ben on the same side. The Shikellamy safety would shade to the side of our trips,” Shoch said. “We had a seam to that opposite side and all Wyatt or Ben had to do was get past the linebackers and they were open.”

The Seals’ final touchdown came early in the fourth quarter on Kahn’s 4-yard TD run. The TD was set up by two long passes to Metzger, one of 28 yards down to the Shikellamy 15. The second came on a second-and-24 for 24 yards on the play before Kahn’s score.