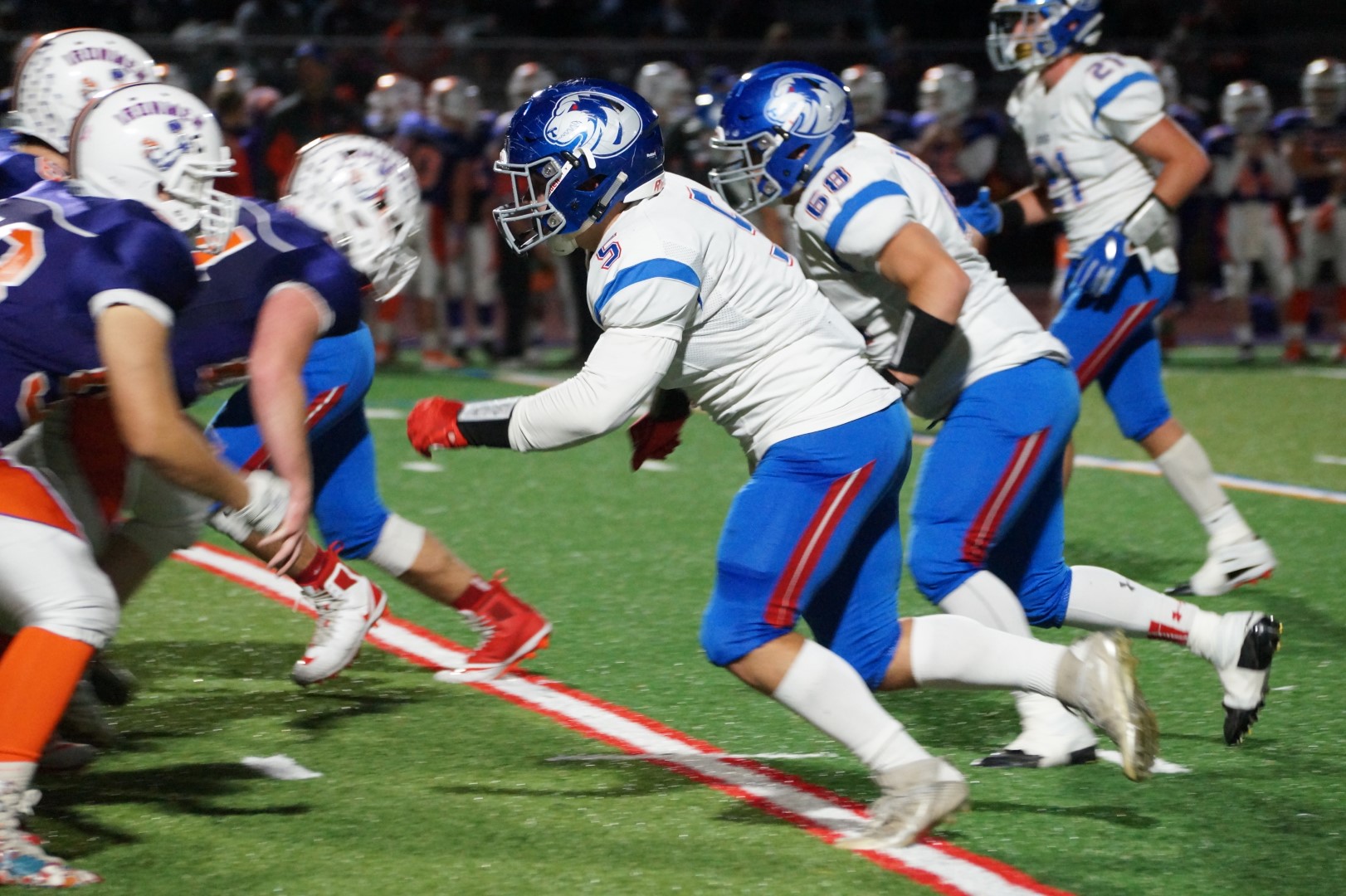 DANVILLE — Thrilled with his defense for the better part of two quarters, Selinsgrove coach Derek Hicks could mull possible adjustments when the Seals punted the ball to Danville late in the half.

After all, what's the worst that could happen in the final 2 minutes, 22 seconds?

Apparently a young quarterback could catch fire, turning a one-touchdown lead into a three-score margin before the halftime horn.

Riley, who opened the game 1-for-6 passing with a string of five incompletions, was unstoppable in the hurry-up attack. His first eight passes in the game-changing string all went for 10 yards or more, including a 27-yard TD pass to senior brother Peyton Riley, and four in a row that moved Danville from its own 17-yard line to field goal range in the waning seconds.

"It's amazing," said Ironmen coach Jim Keiser. "He's well beyond where he should be as a sophomore. I mean, you don't see a quarterback like that too often as a sophomore ... I think, maybe, (former Seal) Logan Leiby. They're very rare — and he's getting better and better."

Persing ran for three touchdowns, upping his season total to 20, and Shane Kozick surpassed 100 career receptions as the Ironmen (8-1) won their seventh consecutive game and all but locked up the District 4 Class 3A top seed.

It just took some time to show it.

Selinsgrove (4-5) picked up only seven first downs, but two came on its game-opening possession. Freshman quarterback Danny Shoch converted third-and-10 with a gorgeous deep ball to Wyatt Metzger for 42 yards, and later picked up third-and-4 with a 10-yard strike to Christian Kantz. The Seals faced fourth-and-1 from the Danville 22 when Shoch took a shot to the end zone that fell incomplete.

The Ironmen also rolled the dice on fourth down the first time they had the ball, trying a fake-punt pass to open receiver Ian Persing that was overthrown by KJ Riley. His calibration was still off on a second-quarter deep shot to Ian Persing that was two steps long. Riley was 3-for-9 for 27 yards at that point; he finished the half 14-of-20 for 185.

"That's him," Keiser said with a laugh. "I think, early on, their pressure got to us a little bit and forced him (to rush plays), but once he settles in he's fine."

Evan Welliver intercepted a pass to set up Danville at the Selinsgrove 30. Four plays later, Peyton Persing ran a Wildcat keeper to the right and, with a good block from Eric Sees, turned it up for an 18-yard touchdown.

The Seals then punted the ball back with 2:22 to play, and KJ Riley had the Ironmen on the board in 43 seconds. He hit Kozick for 10 yards; Peyton Riley for 38; Peyton Persing for 10; and his brother for a TD over a defender on a corner route.

Danville's defense forced a three-and-out but Metzger punted the ball to the 17. Riley went right to work, hitting Ian Persing for a 20-yard gain to open a 68-yard drive that ended in Peyton Riley’s 32-yard field goal with 1.2 seconds left.

"KJ Riley did a nice job of running the two-minute drill (and) drove them downfield," said Hicks. "We gave up the one big play over the top, which certainly hurts, but, offensively, we've got to find a way — with a minute and a half to go — to be able to run the ball, get a first down or two, and get out of there without giving the ball back to them."

Peyton Persing capped an eight-play, 62-yard drive to start the second half with a 2-yard TD run. He then cashed in brother Ian's interception near midfield with a 4-yard run on the play after the Rileys hooked up for 42 yards. Peyton Riley finished with five catches for 116 yards.

The Seals finally got on the board with 1:38 left in the game when junior Dean Hollenbach broke a 78-yard gain to the Danville 5 and scored on the next play.

"We like to say we're a second-half team, so if we hold you scoreless in the first half that's good for us," said Fausnaught. "We know we're going to come out and be a little more intense, pick it up, and make our adjustments."