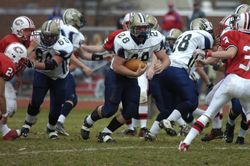 That score remain unchanged in the second half as the Eagles blanked Canton, 14-0 in the District 4 Class A semfinals. But if one wanted a reminder of what the 2008 Warriors represented, they provided it in that second half, allowing just 83 yards, forcing two turnovers and threatening to mount another comeback.

When you have 25 players dress as Canton did Saturday, hanging in against a perennial district title contender isn't a bad way to end a season-especially when you finish 9-2, the best record for a Warrior team since 1997.

They had their chances.

Three times No. 1 Canton started second-half drives in Line Mountain territory but each time the No. 4 Eagles (8-3) snuffed out those drives. The Eagles allowed just one first down on those possessions. Still, Canton kept threatening because of its defense and drove to the Line Mountain 20-yard line with less than four minutes remaining.

Corey Peterson nearly made an outstanding leaping catch on the next play but the ball came loose when he hit the ground hard. One play later, Jachin Spotts intercepted an overthrown pass in the end zone, clinching the win.

"They play real sound defense and we just couldn't get the big plays that we had been able to get all year," Moyer said. "The good thing about kids is they are young and can shake things off easier but for us coaches we're going to be thinking about this one for quite a while."

While Canton thinks about what might have been, Line Mountain sets its sights on Southern Columbia in next weekend's district final. The Eagles became the first team in program history to reach three straight district finals. Line Mountain ended Southern's 16-year reign as district champions last year and has won two straight semifinal road contests.

"Being in three straight district finals is big for the program and it's nice for these kids to have their own little niche in the history books," said fourth-year Line Mountain coach Todd Rothermel. "When we came in here we told the kids we wanted to build the program back to what it was in the 90's. Now we have to go out and win one and that's what we're going to talk to the kids about this week."

Junior running back Chris Moore ran for 152 yards and scored two second-quarter touchdowns on 32 carries. Running behind an offensive line that dominated the line of scrimmage in the first half, Moore gained 101 yards, scored on runs of one and eight yards and helped the Eagles convert all three of their fourth-down attempts.

The offensive line received a boost with the return of senior Jon Fausey, who had missed the last five weeks with a knee injury. Fausey's impact extended to defense where he led a dominant effort as Line Mountain held Canton's high-powered offense to a season-low 94 yards. Fausey made a team-high nine tackles and helped the Eagles limit Canton to one first down in the first three quarters.

"Jon is the kind of player who puts the other kids at ease because they know that whatever is going on he will get them straightened out," Rothermel said. "He's a four-year starter and he started his first game as a freshman and having him out there is like having another coach on the field because he is so smart and knows the game plan so well."