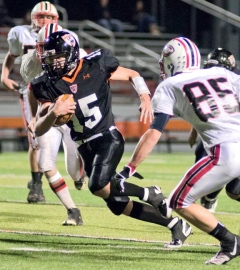 TOWANDA - The Black Knights struck early and never looked back en route to a 42-7 win over the visiting Canton Warriors last night.

After a three-and-out on Canton's first possession, Towanda took over and Coach Dawsey decided to go up top right away, as quarterback Trey Sites went 78 yards down the right side line to Zach Ripic for the score. Mason Roof added the extra point and with only two minutes gone, Towanda lead 7-0.

Both teams traded punts before the Black Knights would strike again as on a second and ten pass attempt from their own 37, Canton's quarterback Ben Pepper was picked off by Casey Huff who raced down the right side line 37 yards for the score. Roof's kick was again true and Towanda led 14-0 with 3:54 left in the first quarter. Both defenses would prevail through much of the second quarter before the Warriors found themselves pinned deep in their own territory. A fourth and ten punt from their own 16 was returned all the way back to their own 25. On first down, Sites went over the left side and rambled in for the touchdown. Roof's third PAT made it 21-0 as teams entered the locker rooms for half time.

Towanda picked up where they left off in the third quarter, driving 55 yards in six plays on their second possession. Going for it on fourth and eleven from the Canton 30, Sites found Mason Roof over the middle and Roof would turn the short catch and run into a 30 yard score. He added his own extra point and Towanda led 28-0 at the 7:38 mark of the third quarter.

The Canton coaching staff decided to turn to their passing game and Ben Pepper appeared ready for the task. Moving from their own 30, a short completion brought them to the 35 where Pepper found Chase Pepper open down the left side line for a 55 yard gain. On second and goal from the 10, Pepper rolled right and hit Wes Moore between two defenders at the goal line for Canton's first score. Ryan Jannone added the extra point and the lead was cut to 28-7 with 5:38 left in the third quarter.

The Black Knights wasted no time bringing the lead back to four scores as Sites again found Ripic on a 50 yard bomb to increase the margin to 35-7. The Warriors would drive 59 yards on twelve plays, but the Black Knight defense stiffened and the ball was turned over on downs at the 16. From there, they would need only five plays highlighted by a 67 yard Sites keeper over the right side, to light up the score board again. This time it was Garrett Dinelli going in from 3 yards out with 10:17 left to start the mercy rule clock and put the Knights up by a final score of 42-7. JV players from both teams saw quality times for the remainder of the fourth period.

Sites lead all rushers with 106 yards on five carries and one touchdown. He also completed six passes on fourteen attempts for 208 yards and three touchdowns with two interceptions. For Canton, Jordan Campbell rushed for 38 yards on ten attempts while Ben Pepper completed 14 of 29 passes for 217 yards with one touchdown and one interception.