Athens holds on to top Troy. 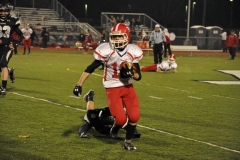 ATHENS - Athens knew coming into the game Troy was going to give it everything they had.

But they were able weather the storm thanks to a strong ground game, timely passing and a stout defense as the Wildcats defeated the Trojans 21-9 in the first round of District IV, Class AA football action Friday.

"Its tough playing somebody twice," Athens coach Jack Young said. "They did a great job offensively and defensively with some adjustments they made. I just said to our kids I think they may have out played us a little bit emotionally but in the end we out toughed them."

In their regular season match up Athens won 35-7 but it was only 6-0 at the half.

"We knew a little what to expect," Athens' quarterback Troy Stivason said. "Their coach is smart. They made a few adjustments and made it a little more difficult this time."

Behind his offensive line Athens' Tyler Birdsall had a busy day, carrying the ball 38 times for 145 yards and two scores to lead the Wildcat offense.

"The way the second half went we just needed to keep the ball on the ground and run that clock out," Young explained.

And while the cold air may have forced away from the air Wildcat quarterback Troy Stivason had a few key pass plays to Ray McDougan that kept drives alive.

It was Athens' bend but don't break defense that may have won them the game, though. Missing two starters, the Wildcats found themselves inside their own 20 yard line three times in the first half but only conceded a field goal.

For Troy they had all the pieces to pull off the upset in the second half but the most important one. Halfway through the third quarter Trojan quarterback and leading rusher Jed Wright was sidelined with a broken hand and never returned.

Up to that point Wright had amassed 162 yards on 15 carries but the Troy offense was never quite the same after he left.

"I'm very proud of our kids," Troy coach Jim Smith remarked. "Despite some difficult things happening to us in the game they played their hearts out, they couldn't have played any better. Athens is a good football team, I wish them all the luck as the districts proceed."

Troy started the game with the ball and used a 47 yard Wright run to get to the Athens 18-yard line. The Wildcat defense forced them into a fourth down where Josh McClaren's 34 yard field goal try was just short.

On Athens' ensuing possession they took the ball all the way down to the Troy 19 where Birdsall had the ball ripped away by Troy's Connor Voorhees and the Trojans took over.

On their ensuing drive an 18 yard run by Wright got them out to midfield and they looked to be in business. However, a shotgun snap went through Wright's hands, who recovered deep behind the line of scrimmage. He tried to make something out of it but it was stripped and picked up by Athens' Stag Shadduck. Shadduck returned the ball to the Troy 10 yard line.

Three plays later Birdsall punched it in from a 1-yard out for the game's first score. Stivason added the point after and Athens led 7-0 with 10:29 left in the first half.

On Troy's ensuing drive a 32-yard McClaren run on third-and-9 set them up inside the Wildcat 30. Wright then ran for 11 yards to get inside the red zone, followed by an Athens offensive interference penalty to put Troy at the 8-yard line for first and goal.

The Wildcat defense didn't give up the touchdown, though, holding Troy to two runs of 2-yard each and an incomplete pass that was almost picked off. The Trojans settled for a McClaren 21 yard field goal to cut the deficit to 7-3 with 6:16 left in the second quarter.

Athens went to work on their third drive, this time going to the air. Stivason had two big hook ups with Ray McDougan, one for 20 yards, then another for 24 to get the Wildcats to the Troy 41 yard line.

On third-and-8 Stivason then found Curt Moore for an 8-yard first down catch. A play later Stivason took a quarterback keeper to the Troy 5-yard line. From there Birdsall ran it in for his second score of the game.

Stivason added the point after and Athens went up 14-3 with 1:59 left.

Troy wasn't content to sit on the ball when they got it back, though.

A 39 yard run by Wright followed by a 23 yard run from Isaac Havens two plays later put the Trojans down to the Athens 6-yard line.

Once again the Wildcats stalled out the Troy offense, forcing a running play for no yards followed by two straight incomplete passes. The second incomplete pass was a halfback pass by Justin Bradley that was just off the mark.

McClaren tried the 23 yard field goal but pulled it wide left and Athens went into the half still up 14-3.

"The kids understand its not easy to score once you get inside the 10, 15 yard line," Smith said. "Athens is an outstanding defense."

In the first drive of the second half the Wildcats stalled out at midfield as Troy forced the first punt of the game.

Justin Bradley's 28 yard on Troy's first down got them up to the Wildcat 40 and the Trojans looked to be in business once again. However, three plays later Wright went down with his injury on a third-and-2 quarterback keeper. With Havens at the helm Troy went for it on fourth down but was stuffed by Athens.

The Wildcats went 3-and-out on their ensuing drive with Stivason's punt pinning Troy inside their own 30 yard line.

A third-and-11 pass interference call on the Wildcats put Troy up to Athens' 40 yard line. On the next play it looked like Havens had found teammate Ryan Reeves for a touchdown pass play but Reeves was called out of bounds on the catch and it went down in the book as an incomplete pass.

No matter as two plays later Troy's second back pass attempt of the day was successful as Bradley found Brandon Mattocks, who broke one tackle and ran 61 yards for Troy's only touchdown of the game.

McClaren added the point after to cut the Athens lead to 14-9 with three minutes left in the third quarter.

On the ensuing drive the Wildcats went 14-plays down to the Troy 25 yard line but it was the Trojan defense that held out, forcing two incomplete passes and a turnover on downs.

Troy's ensuing drive was shut down by the Wildcats, though, forcing Troy back five yards before they punted for the first time in the game.

On first play from scrimmage Athens' Birdsall fumbled the ball where it was fallen on by Troy.

Down at their own 19-yard line Troy was again wasn't able to get much going and punted again with time running out.

The Wildcats then went on a game deciding drive as they went 56-yards on 10-plays finished off by a Stivason 20 yard touchdown run. Stivason added the extra point to make it 21-9 Wildcats, sealing the win with just 1:03 left to play.

The key to the drive was an 8-yard pass play from Stivason to McDougan on third down to get a new set of downs.

"That was a huge pass," Stivason said. "That was a huge catch there. I was just rolling out and saw him wide open. He was wide open all night a couple times I just couldn't hit him. That time I did."

Stivason was 6-for-14 for 90 yards in the game. He found McDougan four times for 65 yards while Moore had two catches for 25 yards.

Bradley had five carries for 44 yards for the Trojans while McClaren had two for 32 yards. Havens ran 22 yards on five carries while Diante Jones had four touches for 23 yards.

"It doesn't make it easy when your leader goes down," Smith said about his team. "I feel like despite that they made this a very close game."

The Trojans will have plenty of returnees coming back for another run next season.

"I have high hopes for next year," Smith explained. "But a lot comes down to things like injuries and stuff like you saw here tonight. But were going get back to it in the off-season and get excited about next year and do what we do."

As for Athens, they will be traveling to top seed Danville next Friday.

First things first for the Wildcats, they need have everybody if they are going to beat the Ironmen.

"We just have to get the guys back we didn't have this week for next week," Stivason said.