Canton falls to South in overtime. 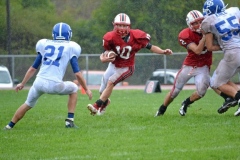 In the pouring rain they looked to pull out a their first win of the season. They led 14-8 late in the fourth quarter when South Williamsport's Dominick Bragalone broke off a 45-yard touchdown run with 2:04 left to play to push the game in overtime.

There South had the ball first and scored on a Matt Bartholomew 4-yard run. The 2-point conversion was good and the Mountaineers now led 22-14.

Canton was able to respond as John Bowman punched one in from 1-yard out. However, their 2-point conversion try failed and they would lose the NTL Small School football game 22-20.

There was no scoring until the early fourth quarter when Eddie Larcom found Noah Barnett for a 25-yard scoring strike to put Canton up 14-8 with 11:53 left to play.

The Warriors weren't able to get much of a ground game going, 44 carries for 74 yards, but they did throw the ball for 105 yards.

Bowman led the team on the ground, too, with 41 yards on 17 carries. Wes Moore had three catches for 32 yards for the Warriors while Tim Bassett had four catches for 29 yards and Barnett made two catches for 44.

Larcom also nabbed this third interception of the season.

On the other side South rushed for 217 yards on 38 carries, led by Bartholomew's 113 yards and two scores on 12 touches. Bragalone had 60 yards on six carries for the Mountaineers.