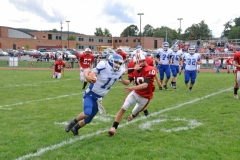 CANTON - In the first two games of the season, the North Penn Panthers were a passing team, rarely getting much going on the ground.

On Saturday, senior quarterback Taylor Hillson did a lot more running of the ball than passing it and he racked up 193 yards and three touchdowns on 23 carries as the Panthers picked up their first win of the season 39-14 over Canton.

It was homecoming for the Warriors, but the Panthers didn't waste anytime spoiling the day for the host team, scoring 20 first-quarter points on their way to the win.

"That was important," North Penn coach Tom Dickinson said. "Here on a Saturday it's their homecoming. Not a lot of people believed in our team. But, they stuck together and I'm very proud of them."

Hillson knew how big that early score was.

"That pushed us, we knew it was our day then," he said.

Hillson sparked the first drive with a 42-yard run and he capped it off with a four-yard touchdown just 2:11 into the game. The kick failed and it was 6-0 North Penn.

"We had to mix it up a little bit," Hillson said of the Panthers plan to run the ball on Saturday. My line really did a good job today."

Hillson added to the lead at 6:23 of the second quarter when he ran in from five yards out. On the two point play it appeared Canton had made the stop when they got their hands on Hillson's pass, but it went high and Bryce Zaparzynski hauled it in.

Hillson then hooked up with Zaparzynski on a 23-yard touchdown with 1:23 left in the quarter, with Canton blocking the extra point.

Hillson and Zaparzynski combined for 37 carries on the day against Canton.

"I guess they saw on film that they couldn't stop the run well so we ran it," Zaparzynski said. "Early in the game they couldn't handle our line."

For Zaparzynski there was an added workload carrying the ball on Saturday.

In the second quarter it was the North Penn defense that took over.

The Panthers forced four turnovers in the game and scored two times, the first coming with 6:57 left in the half when Brandon Carlson made the hit on Noah Barnett after Barnett caught a pass from John Bowman. Carlson missed the tackle, but the ball came free and he picked it up and scampered 70 yards for the touchdown. The two-point try failed and it was 26-0.

"Brandon Carlson made the hit and missed the tackle and got up and got the fumble," Dickinson said. "That's just effort. A lot of kids would have had their heads down, but that was just effort."

For Carlson it was a long run, but it was worth it for his first career defensive touchdown.

"I missed the tackle right off the bat, but then I was able to pick it up," Carlson said. "I'm not used to running like 90 yards like that."

After he scored Carlson had to wait while the officials talked about the play and all that was going through his mind was hoping they ruled it a touchdown.

"That was bad watching the officials decide if it was a touchdown or if our offense had to go out there," Carlson said. "I was just hoping they would give it to me, I had never had one before."

After an 0-2 start to the year, Carlson knew the defense had to play well.

"We had to step up," he said. "We knew we had to come together as a team and we did that."

Canton got on the board late in the quarter after an eight-play 84-yard drive, sparked by a 27-yard run by Tyler Cole. Wes Moore got Canton their first score on a two-yard run and Brian Jannone hit the extra point to make it 26-7 with 3:42 left in the game.

Canton got the ball back in the half, but Zaparzynski jumped in front of a Bowman pass and took off for a 60-yard score with 1:32 left in the half. The two-point try failed, but it was 32-7.

"I just thought, I hope no one is behind me and gets me before the end zone," Zaparzynski said.

With 1:27 left in the third quarter Bowman hit Chase Pepper who dove for a 21-yard touchdown catch and Jannone hit the extra point to make it 32-14.

However, another Zaparzynski interception in the fourth quarter thwarted any comeback plans for the Warriors.

"I think our defense got a lot better," Zaparzynski said.

"Our defense is definitely all hard workers," Hillson said.

Hillson finished off the scoring with 1:24 left when he scored from 54 yards out and Sam Rotella hit the extra point to make it 39-14.

"Taylor is an athlete and we knew we had to get him more involved in the offense," Dickinson said.

For Hillson after airing it out the first two weeks, he knows running the ball will only help the rest of the year.

"You could tell the linebackers had to lay off, to make sure I wasn't going to run," Hillson said.

While losses to Loyalsock and Athens aren't the way the Panthers wanted to start the year, they know that there is plenty of time left in the season.

"I told the kids today, forget the first two games and let's look to get on a little run," Dickinson said.

The North Penn players hope that Saturday is the start of things to come.

"I definitely hope so, we just have to keep working hard," Hillson said.

Along with his rushing, Hillson was 2-for-4 passing for 47 yards and a score, with both passes to Zaparzynski, who also had 14 carries for 44 yards, while Ryan Bogaczyk had 15 yards on three carries, as the Panthers gained 255 yards on the ground.

Zaparzynski also had two interceptions in the game for North Penn.

Canton was led on the ground by Moore with 100 yards on 16 carries, while Cole gained 66 yards on eight carries and Tim Bassett had 36 yards on six carries and Bowman had 16 yards on 12 carries.

Bowman was 6-for-12 passing for 85 yards, a touchdown and two interceptions.

Bassett had one catch for 49 yards, while Pepper had the catch for 21 yards and a score. Cole had two catches and Moore and Noah Barnett also had catches.

Canton is at Wellsboro on Friday, while North Penn hosts Towanda.

Brian Fees is the sports editor of the Daily & Sunday Review in Towanda, PA.