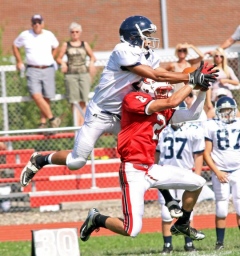 CANTON - In a defensive battle it was Muncy that got some offense going in the second half to beat Canton 20-7 in NTL Small School football action Saturday.

The Indians were able to wear down the Warriors under an oppressive afternoon sun for the key league win.

"We play 11 people both sides of the ball all 48 minutes, that's going to happen," Canton coach Miller Moyer remarked.

Troy Hembury led the Muncy attack, rushing for 124 yards on 16 carries with one touchdown.

Canton's offense struggled to gain any traction, amassing just 63 total yards while rushing for 32 yards on 32 carries. The Warriors picked up three first downs while fumbling the ball five times, losing it once.

Part of their struggles is due to position changes for many players.

"Were taking backs and trying to make them linemen," Moyer explained. "They're doing the best they could. We have to try to juggle things as much as we can for next week."

Chase Pepper punted the ball eight times in the game for a strong average of 38.5 yards per punt.

While their defense was able to keep Muncy off the scoreboard in the first half, the Indians eventually found some holes and put together even positive plays to score 20 second half points for the win.

The Warriors were also penalized eight times for 50 yards with whistled six times for 33.

It was a back and forth game early on until Canton recovered a fumble off a muffed punt return. They got the ball inside Muncy territory but the Indian defense held, forcing Canton to turn it over on downs inside the Muncy 30-yard line.

Two plays later Indian Anthony Barberio was picked off by Canton's Eddie Larcom, who returned it to the house. After a Brian Jannone extra point the Warriors led 7-0 with 9:54 left in the opening half.

On Muncy's ensuing drive Canton recovered a fumble near mid-field but couldn't do anything with it. The teams traded possessions until the break with neither chewing up much yardage.

Canton got the ball to start the second half but back to back penalties pinned them down inside their own 25-yard line. Things went from bad to worse as on fourth and long a bad snap on the punt attempt forced Pepper to run. He picked up 15 yards but was well short of the first down.

On the ensuing Muncy possession Kenneth Koch found a seam down the right sideline for a 36 yard touchdown run. The Hembury extra point knotted the game up at 7-all with 9:07 left in the third quarter.

The Warriors went 3-and-out on their next drive but got some momentum back as Larcom again picked off a Barberio pass.

However, on the next play Canton fumbled the ball with Muncy landing on it deep in Canton territory. The Warrior defense held, forcing the Indians to turn it over on downs.

Once again Canton's offense sputtered and they were forced to punt.

Muncy wasted little time on their next drive as Hembury busted out a 37 yard run on their second play. Four plays later he punched one in from two yards out to put the Indians up 13-7 with 9:03 left in the game.

The teams then traded possessions until Muncy once again got the ball back. On third and short Hembury came up big, running for a 45 yard gain to set up first and goal. Two plays later Tyler Moyle punched one in from five yards out with 1:16 to go in the game.

Hembury added the point after to seal the win as the Indians led 20-7.

On Muncy's side, Barberio was 4-for-9 for 28 yards with the two picks.

Looking ahead to next week Canton is going to focus on improving their running game.

"We have to be able to run," said Moyer.