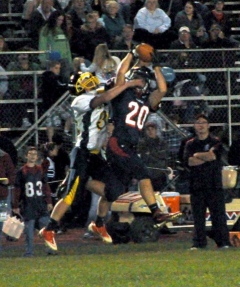 SAYRE - Senior Kyle Post had a night to remember here Saturday, running for 177 yards and two TDs and intercepting three passes to lead Sayre to a 34-12 win over Cowanesque Valley on Homecoming night at the Lockhart Street Bowl.

"I show all our younger players a picture of Kyle Post when he was in 9th grade. He was about 98 pounds and the biggest thing on his body was his hair.

"He is a classic case of a kid who has worked hard," said Hanafin. "He studies hard, he does everything he's suppose to do and he wants to be great."

The Redskins suffered through a rough start to the game, chewing up 5 1/2 minutes on their opening possession and driving to the CV 18 before turning the ball over on downs.

On the Indians first play, QB Brandon Whitsell laid a perfectly-thrown ball into the arms of Ryan Freeman, who never broke stride, for an 82-yard TD pass to give CV a 6-0 lead with 6:13 left in the first quarter.

After an exchange of punts, Sayre QB Adam Wampole returned the favor, connecting with Cody Ketter, who made a leaping catch, then broke a tackle and raced 67 yards for a TD to tie the score. Al Bodolus bulled in for the 2-point conversion to give the Redskins an 8-6 lead with 11:48 left in the first half.

Midway through the second quarter, Sayre took possession following a CV punt at its 28.

On the second play, Post ripped off a 44-yard run to the Indians 28. Six plays later, Kyc swept in around left end to give Sayre a 14-6 lead with 1:51 remaining in the half.

Fifteen seconds later, Sayre was in the end zone again.

After the Redskins kick-off sailed out-of-bounds, giving CV the ball at its 43, Whitsell's first pass attempt was picked off by Gabe Nobles, who returned it 32 yards to the Indians 18.

Midway through the third quarter, CV reeled off a six-play, 77-yard drive that featured a 42-yard run by Luke Plummer, who ran for 128 yards in the game. Whitsell capped the drive with a 14-yard run on a keeper up the middle to cut the deficit to 22-12.

The Redskins answered very quickly as Post ripped through the center of the CV defensive front and raced 65 yards untouched for a TD on their first play to make it 28-12.

Early in the fourth quarter, CV drove deep into Sayre territory, but Post picked off a pass at the 5-yard line to end the threat.

After a low snap on a Sayre punt attempt gave CV the ball back at midfield just a few minutes later, Post picked off a pass at the Sayre 20 to end another Indian possession.

Sayre's final score of the night came as time expired. With the Indians still trying to get into the end zone, Nobles stepped in front of a pass at the Redskins 40 and raced 60 yards down the far sideline for a TD to provide the final margin.

Hanafin knew his team didn't play its best, but was pleased with his team's grit and resolve.

"(CV) popped some big plays on us, but we stopped them when we had to.

"Winning ugly is still winning," added Hanafin. "It use to be if it was an ugly game, we lost. So when we have an ugly game and we win 34-12, we're going to take that."

CV actually outgained Sayre in the contest 384 yard to 339.

Whitsell completed 11 of his 30 pass attempts for 202 yards and a TD, but was picked off five times. Shay Daly led CV with four receptions for 57 yards.

Wampole completed 3 of 7 attempts for 94 yards and a TD. Post had two receptions for 27 yards. Kyc added 44 yards and a TD on the ground, while Bodolus chipped in with 27 yards on 11 carries. 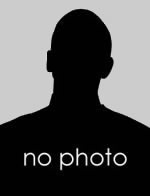 Tim Birney is the founder/owner of Valley Sports Report, which covers high school and youth sports in the Sayre and Athens, PA and Waverly and Tioga, NY school districts.

Birney, a 1988 graduate of Utica College of Syracuse University, spent nearly 20 years as a Sports Writer at the Daily Review and Evening/Morning Times.

He founded Valley Sports Report in August of 2009.