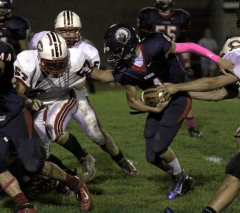 SAYRE - In a clash of NTL foes, the Redskins came away with a 32-21 old-school, rock 'em sock 'em win. Sayre won with a ball control offense and a tenacious defense that took over in the second half. The game featured some of the most sustained drives in the NTL this year.

Canton scored on the first series of the game, strictly on the ground. The drive covered 55 yards on eight carries by Tim Bassett, Tyler Cole, and Wes Moore. Bassett ended the drive on a seven-yard run.

The Redskins answered with a 57-yard drive on seven carries, but sliced in a couple of passes from Adam Wampole to Kyle Post. Their final pass covered 15 yards for a touchdown, but the kick failed and the Warriors held on to a 7-6 lead.

Canton responded on the kickoff when John Bowman made some nifty moves along the home sideline, bringing to ball to the Warriors' 34-yard line. Once again, the Bassett, Cole, Moore three-headed monster moved the ball. This time Wes Moore landed in the endzone with a five-yard run.

Once again, the Redskins tried to answer the call with a 13-play drive that ended on the two-yard line after Albert Bodolus came up short on a fourth-down run.

Sayre's defense held tough and made the Warriors punt from their endzone, giving the Redskins the ball on their own 34-yard line. After a three-yard run by Post, Jeremy Kyc ripped off a 27-yard touchdown run with just under four minutes left in the half.

"He loves playing football," Sayre coach Larry Hanifan said of Kyc. "He shows up, and he's in the moment."

Sayre tried for two to tie up the game, but failed.

After a three-and-out by Canton, Post returned the punt to Sayre's 45 and then an unsportsmanlike penalty was tacked on, giving the Redskins the ball on their 30-yard line. With ten seconds left, Wampole scored from the four.

Again, Sayre failed to convert the conversion, but went into halftime with an 18-14 lead that they wouldn't relinquish for the rest of the game.

The Redskins took the second half kickoff and set the tone for the rest of the game. Sayre scored on a one-yard plunge by Kyc after a 15-play drive that ate just over 10 minutes off the clock.

"We knew we had to keep the ball away from them because they hit you quick and can execute," Hanifan said.

Canton responded with a 10-play drive into the fourth quarter. On third-and-seventeen from the 33-yard, Bowman hit Eddy Larcom on a quick slant and Larcom outraced the secondary for the scored. The extra-point closed the Sayre lead to three at 24-21.

The Warriors stopped the 'Skins, forcing a punt and giving Canton a chance to go ahead. The Warriors took over on the 38, but on the first place from scrimmage, Kyc stripped the ball from Larcom after a 12-yard run and David Bidlack recovered the ball.

Kyc and Bodolus led the way from the 46 to the endzone. Kyc ran three times for 13 yard, but Bodolus powered the last two runs for 11 yards and scored from the six. To top things off, Bodolus added the two-point conversion for the 32-21 win.

Kyc finished with 16 carries from 111 yards and Bodolus added 56 yards on 10 carries.

"We have some older Sayre players on our staff and they say these guys are the same old-time Sayre-type players," Hanifan said when asked about Bodolus and his play.

Canton went to the passing game in the end, but Kyc loaded up on Bowman from his defensive end position, forcing an errant pass, sacking him, and recovered a fumble to close out the game.

Soaking from a Gatorade shower after the game, Hanifan said, "I'm ecstatic. Canton is the kingpin of the NTL small schools. We have the utmost respect for them. To beat them is a great accomplishment. I couldn't be happier."