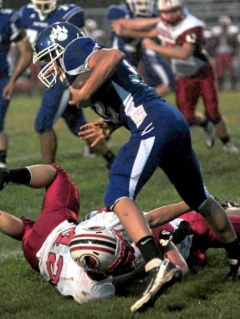 BLOSSBURG - The North Penn Panthers outlasted the Canton Warriors at home Friday night, scoring a 26-21 win over the visitors in wet and dreary conditions.

The Warriors had a chance to stage a winning drive with 2:33 left to go in the game after forcing a North Penn three-and-out, but Canton's Tyler Cole muffed a punt to give North Penn the ball back. The Panthers handed the ball to running back Bryce Zaparzynski five times after the turnover, picking up three first downs before quarterback Bo Burleigh took a knee to solidify the Panthers' win.

"I told them that all we had to do was get first downs and the game was over," North Penn head coach Tom Dickinson said. "And we did just that."

Both teams spent most of the first quarter struggling to move the ball in the wet conditions. Canton would see the end zone first by way of a defensive touchdown, as North Penn receiver Dayton Wood let a screen pass through his hands and bounce off of his helmet before Canton defensive back Tim Bassett intercepted the ball and ran it back for six points. Canton's ensuing two-point conversion attempt was good, and Canton was on the board first, leading 8-0 with 3:42 to play in the first quarter.

"Our receivers had gloves on, and they just weren't working," Dickinson said of the interception that was returned for a touchdown. "We got the gloves off, and then we were able to throw it and catch it."

North Penn answered on their following drive, as they continued to trust their passing game with Burleigh finding a streaking Devin Remley down the left sideline for the nineteen yard score. The two-point conversion attempt failed, and Canton held the slight edge, 8-6 with 2:13 to play in the first quarter. "We were able to make some great catches, especially the one Bo threw to Devin Remley, that's the way we practice it," Dickinson said of the Panthers' first touchdown.

Canton would extend their lead on their subsequent drive, as quarterback John Bowman picked up ten yards on a quarterback keeper to set the Warriors up with a first-and-goal at the one yard line. Running back Malachi Washington punched it in for the touchdown. Brian Jannone's extra point was good, and Canton lead the Panthers 15-6 with 11:13 to play in the second quarter.

After trading punts, North Penn used two Zaparzynski runs to find their second touchdown of the game. Zaparzynski ran up the middle on his second run of the drive, out-sprinting the defense for the 64 yard touchdown. The two point conversion attempt was no good, but North Penn had chipped into the Warriors' lead, making the score 15-12 at the 8:11 mark of the second quarter.

After a promising Canton drive ended in a punt, North Penn capitalized, as Burleigh found Levi Christman on a slant route for a 58 yard gain. Four plays later, Burleigh found Remley in the endzone for a nine yard touchdown to give the Panthers their first lead of the contest. The two-point conversion attempt was no good, and the Panthers led 18-15 headed into halftime.

Canton's first drive of the second half took them all the way to the North Penn 10-yard line before a Canton fumble was recovered by North Penn. North Penn couldn't capitalize on the turnover and punter the ball back to the Warriors at their own 25-yard line. Canton would again turn the ball over, this time with North Penn's Wood intercepting an overthrown Bowman pass to give the Panthers the ball at Canton's 39-yard line. After three runs and one reception by Zaparzynski, he found room up the middle from fourteen yards out to give North Penn their final score of the game. Burleigh found Luke Kelly in the end zone for the two-point conversion to put the Panthers up 26-15 with eight seconds to play in the third quarter.

After trading punts for much of the fourth quarter, Canton pushed North Penn into another punting situation with 4:41 to play in the game, this time blocking the kick to set the Warriors up at the Panthers' 19-yard line. Canton used four Bassett runs to score, using just one minute of the clock. The two-point conversion try was no good, setting the final score at 26-21.

Zaparzynski finished the game with 272 yard on 43 carries and one touchdown, and 11 yards on two catches. "There defensive line was good but our line kept fighting all game for me," he said. "That was the key."

Burleigh finished the game going 7-21 for 89 yard through the air.

For Canton, Bassett ran the ball 24 times for 89 yards and a touchdown, while also intercepting a pass for a touchdown on defense. Bowman went 3-10 for 30 yard through the air and ran the ball ten times for 26 yards.

Next week the Warriors will host Wellsboro and North Penn will travel to Towanda to take on the Black Knights.