Towanda holds on over Canton. 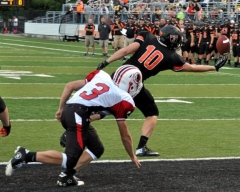 As Towanda head coach Jaime Wecker put it: "It was pretty rough out there. We lost an entire offensive backfield in the first half and all three of them were two-way starters. It was hard for our kids to adjust; they played pretty sloppy there in the second quarter. But they gutted it out and came together and played well. We had a lot of kids playing in the second half that don't normally play those positions and I thought we did much better. All in all, I'm really satisfied with how the kids played."

Towanda buckled down and pushed forward despite their major losses, finishing out week one with a 21-6 victory over the visting Canton Warriors.

The Black Knights would score on their first possession, as QB Noah Huff completed his first pass of the night to teammate Dylan Bates for a 31-yard score. Tyler Basse added the extra point, and with 10:33 left in the first, Towanda led 7-0.

On Canton's first possession, Theron Binford offered up a 20-yard punt on fourth and 24, giving the Knights the ball on the Canton 19 yard line. With Huff gone, Towanda had no choice but to keep pushing. Back-up junior quarterback Brandon McLinko completed a 10-yard touchdown pass to Tyler Vanderpool with 5:23 left on the clock to extend the Knights' lead. Basse locked in the extra point, and Towanda took the 14-0 lead.

Fumbles were an unnecessary addition to the game, as both teams shared 15 total on the night. Throughout the rest of the first half, Towanda and Canton traded possession of the football numerous times.

When both teams emerged from the locker room (second-string QBs in tow), they knew there was no time for mistakes. For Canton, the time had come to put some points on the board. On their third possession of the second half, 15 yards from the end zone, Trevor Route completed a touchdown pass caught by Mason Moore. Route's extra point attempt was wide left, but the Warriors made their presence known as six points were pasted onto the scoreboard.

Unfortunately for Canton, those six points would be the only ones they would ever see on the night. On the other hand, the Black Knights were on their way to proving themselves yet again.

On Towanda's first possession of the fourth quarter, Steven Yates and Brandon McLinko traded carries until on second and thirteen on Canton's 32, McLinko completed a pass to Yates for the score. Basse's PAT was good, and the final score was set, 21-6 with only 5:16 remaining in the fourth.

Canton tried their best to turn things around, but too many careless mistakes held them back. On Towanda's final possession of the game, they took a knee to run out the clock.

Steven Yates of Towanda led all rushers with 58 yards on 12 carries. Behind him was Canton's Noah Barnett with 10 carries for 32 yards.

Next week Canton travels to Sayre and Towanda heads to South Williamsport.