Canton holds on to beat Towanda. 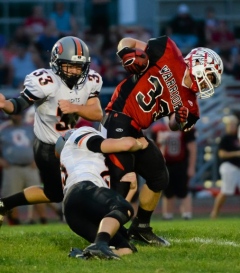 Canton coach Jay Perry pretty much summed up how his side felt after his Warriors held on late to beat Towanda 24-16 in the opening night of football Friday.

It was a game marred by penalties, with 176 total yards being flagged, but made up for that with excitement.

That's when Canton went, what looked like, a game ending drive, pushing the clock below one minute before they were forced to punt. But a blocked punt by the Black Knight special teams gave them new life and they got down inside the 10-yard line with three seconds left.

However, a Bryce Cole tackle on Charlie Watkins at the 1-yard line preserved the hard fought victory for Canton.

"I think we're off to a good start," remarked Cole.

The Warriors did most of their damage on the ground, churning out 156 yards on the ground, but also used big plays and timely passing to score three touchdowns on the day.

"They did a real good job up front," Cole said about the offensive line. "Really opened up holes for us and that won the game."

"I can't say enough about our line," added Perry. "They took the game under control single-handedly, beginning to end."

Gavin Hoffman led Canton on the ground with 78 yards on 15 carries with one touchdown while Cole had 13 carries for 59 yards and a score.

Malachi Washington added eight carries for 29 yards before he left the game hurt with quarterback Ridge Moore chipping in with a rushing touchdown.

Through the air Moore was efficient, 6-for-10 with 106 yards passing and no interceptions.

Towanda was forced to go through the air most of the night as the Warriors held them to 39 yards rushing.

But the Black Knights were able to get some big plays while also being helped by Canton penalties to stay in the game.

Brandon McLinko was 16-for-36 with 174 yards and two touchdowns. He found seven different receivers on the day as Kalob Benjamin (four catches, 46 yards) and Griffin Sites (four catches, 28 yards, one touchdown) were his favorite targets.

"We put ourselves behind the eight ball with penalties and lackluster tackling all the way around," Towanda coach Jamie Wecker said. "Missing blocks constantly on the offensive line, not lining up correctly. Mentally, we are not a good football team right now. I don't think it's a physical thing with us."

Both struggled to start the game as Canton lost a fumble on their first possession of the game while Towanda turned it over on downs.

On Canton's second possession they found some success as they went seven plays and 71 yards to paydirt, thanks in large part to a Cole 46-yard run down inside the Towanda 25.

Five plays later Cole finished off the drive with an 8-yard run. Moore hit Landon Brown for the two-point conversion and the Warriors led 8-0 with 5:33 left in the first quarter.

The Black Knights also found offense in their next drive but they stalled out inside the 10 and came away empty.

The Warriors capitalized on their next drive, going 11 plays and 85 yards for their second score.

The key play was a Moore to Cole 43-yard pass play that got Canton from deep inside their territory to the Towanda 30. Eight plays later on third and goal from the 2-yard line Moore punched it in for the touchdown.

Towanda would respond as McLinko orchestrated a eight play, 59-yard drive where he found Sites in the back of the end zone for a fingertip catch to get on the scoreboard.

Tyler Basse's extra point was good and the Knights cut it to 16-7 with 3:29 left in the second quarter and they would go to the half like that.

The third quarter started much like the first as neither team did much in their initial possessions.

Then it was Canton who once again got rolling as they went on a nine-play, 80-yard drive where Hoffman punched it in from one yard out.

Two big passing plays, Moore to Hoffman for 33 yards and Moore to Washington for 12 yards on third-and-13, were key for their success.

Moore ran in the two-point conversion and Canton pushed their lead to 24-7 with 6:04 left in the third.

The two teams traded possessions until late in the third when the Knights got going again, taking a 13-play drive down to the Canton 8-yard line where Basse hit a 25-yard field goal with 11:02 left in the game to cut it to 24-10.

A 22-yard passing play from McLinko to Benjamin plus two Canton penalties came up big for the Knights.

The Knights turned it up on defense after that, holding Canton to back-to-back 4-and-outs.

Then on the first play from scrimmage McLinko hit Pierce for a 39-yard touchdown strike on a tipped ball with 6:14 left in the game. The point after was no good but the Knights cut it to a one score deficit at 24-16.

That's when Canton's offense got back into high gear, churning out an 11-play, 50-yard drive that didn't end in a score but pushed the game clock to inside a minute.

A big punt from Brady Bryington would virtually seal the win for the Warriors but Towanda's special teams came through with a block and they took over at Canton's 37-yard line.

The Knights drove down inside the Canton 20 thanks to two key hookups between McLinko and Watkins for eight yards and McLinko to Sites for nine yards.

Then on fourth down with seven seconds left, McLinko's pass fell incomplete but Cole was called for pass interference.

"I know I messed up but I couldn't hang my head so I had to keep going," Cole said.

With three seconds to go, McLinko found Watkins, who spun his way through two Canton tackles but Cole met him at the goal line, wrapped him up and brought him down at the 1 to end the threat and the game.

"That's just the way our kids are," Perry said. "They found a renewed spirit. They wanted to come out and start strong this year. Our kids just battled when they had to. It obviously hurt with Malachi out of the game, we had to switch some guys around, but Bryce came up big and he's going to come up big all year."

Canton will host Sayre next week and look forward to going to 2-0.

"Right now we'll take it tonight but tomorrow we have to start thinking about Sayre," Perry said.

As for Wecker, they plan on focusing on the little things as they get ready to host South Williamsport next week.

"As coaches, it goes on my shoulders, I have to figure out a way to make this team better," said Wecker. "Right now we're not where we want to be, where we could be. There's ability there, there's talent there but we have to fix a lot of things. We just have to figure out how to get these kids to play to their ability."