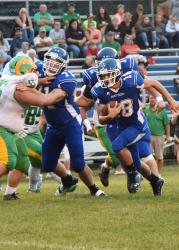 BLOSSBURG — North Penn got two first quarter touchdowns, and their defense pitched a first-half shutout, in a 32-14 win over Wyalusing in a battle of 2-0 teams.

"They were a 2-0 team, it is week three and we are 3-0, so we are pleased with that," North Penn coach Tom Dickinson said.

Kipper Hillson got things started for the Panthers with 9:20 left in the first quarter when he scored on a four-yard run to cap a 10-play, 84-yard drive.

Brendan Hill scored with 4:33 left in the quarter on a five-yard run. The extra point failed and it was 12-0 as the Panthers completed a second 80-plus yard scoring drive.

"The defense played really well," Dickinson said. "They rushed for 103 yards on 34 carries and threw for 17. We played a lot of kids in the second half, so I was pleased with that effort."

Hillson got the Panthers' last score with 9:58 left in the third when he scored on a four-yard run.

The Rams got on the board with 4:44 left in the quarter when Bryton Barna returned an interception 56 yards for the score and the Rams converted on the two-point try to make it 32-8.

Wyalusing capped the scoring with 10:45 left in the game when Ryan Kipp capped a seven-play, 67-yard drive with a 25-yard touchdown. The kick failed to make the final score.

Brock Burleigh was 10-for-21 passing for 140 yards and a pair of touchdowns in the game a week after leaving the game against Athens with an injury.

"He had about 150 yards and two touchdowns and ran for 50 yards and just ran the offense well," Dickinson said. "We did that with the first half and one drive of the second half and then got some young kids some playing time and that's what it's about."

Nick Kasper had two grabs for 42 yards for North Penn and Joel Whitteker had three grabs for 40 yards, while Bickhart had a 30-yard touchdown catch.

Brendan Hill ran for 62 yards on 12 carries with a score for North Penn and Burleigh ran four times for 52 yards. Don Edwards III had 14 carries for 75 yards and Mason Gee had five carries for 80 yards. Wise had three carries for 28 yards and Hillson gained 20 yards on the ground.

Kipp had 66 yards on 11 carries for the Rams and Riley God ran for 25 yards, while Derrick Clark had 23 yards rushing.

Calvin Burke threw for 13 yards for the Rams.

North Penn is at South next week, while Wyalusing is at Tunkhannock.