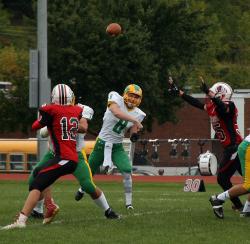 CANTON — It may be September, but Saturday's NTL football game in Canton felt like a district game.

It had momentum swings, players stepping up to make big time plays and emotion all over the field.

But there were still signs it was Week 2.

The teams combined for 176 penalty yards between them, offenses we're inconsistent and there were plenty of mental lapses on defense.

In the end, Wyalusing's goal line stand with three seconds left gave them a hard fought 25-21 win over the Warriors to improve to 2-0 on the season.

"Escape is the word," Rams' coach Jordan Clark said after the game. "We definitely escaped."

Clark had mixed emotions on their win.

On the other side, Canton coach Tyler Sechrist saw something in his team that he didn't see last week in their big loss to Wellsboro where they gave up 64 points.

"That Wellsboro game was a tough game," he remarked. "They're a good team and we didn't play them very well, so I was hard on the boys this week. Our effort wasn't there, and when you play a tough team you have to step it up and they responded today. They played well, just some small things that hurt us. We clean that up and we win the ball game."

He was 9-for-20 for 135 yards, with two scores and one pick while also catching a fourth-quarter pass from Fuhrey. Burke also had 53 yards on the ground off eight carries.

Fuhrey was 5-for-8 for 47 yards with a touchdown and an interception, but did most of his damage with his feet, running for 72 yards on nine carries.

Carl Gowin also had a strong first half running the ball before leaving the game injured with 46 yards on nine carries with a touchdown.

Through the air, Morrison had six catches for 50 yards, Connor Barton had three catches for 55 yards and a score, while Kasar Cameron had two catches for 41 yards.

Timmy Ward had the big day for Canton with 13 catches for 255 yards and two touchdowns while quarterback Michael Smithers was up and down, going 15-for-39 for 259 yards with two touchdowns and two picks. He was also the team's leading rusher with 40 yards on 17 carries.

Ward also had an interception return for a touchdown.

"I told the guys I'm proud of the way they fought," Sechrist said. "We're close and we learned a lot about ourselves."

Their big play game was there, but they struggled to get first downs.

"We need to find a running game somehow," explained Sechrist. "We have the athletes on the edge. We were missing (Levi) Gaiotti today. It would be nice to have him. We were moving Timmy around just to get him in different positions to make plays."

The Warriors took the opening kick-off, and immediately on third-and-long, Smithers found Ward for an 18-yard gain and a first down.

Then, on their next third down, Smithers found Ward behind the defense for a 41-yard touchdown strike.

Curtis Lammy hit the extra point to make it 7-0, less than two minutes into the game.

The two teams would trade punts on their ensuing drives when the Rams got the ball on their 41 yard line for their second drive. A 12-yard yard run by Gowin got them down to Canton's 35 yard line when Shane Fuhrey's pass was bobbled by Riley God, then stolen out of his hands by Ward who went 67 yards in the other direction.

An extra long extra point due to a penalty was no good, but Canton still led 13-0 with 6:34 left in the opening quarter.

This was a flipping of the script for Wyalusing, who scored 14 quick points in their win over Sayre last week.

"We kind of knew it was a trap game coming in, because it was Saturday, one o'clock," said Morrison. "You're not really prepared for it. So when they start hot, we just came in the huddled towards the end of the first quarter and talked to ourselves that we had to get it together."

That getting it together started early in the second quarter. Will Martin returned a Canton punt to the Warrior 13-yard line.

With the best field position they will likely ever see to start a drive, Wyalusing went to work as Burke ran for seven yards, followed by Gowin punching his way in from six yards out to find pay dirt.

On the ensuing kick-of, up man Cody Williams rumbled his way down the Wyalusing 11-yard line.

It looked like Canton was going to stroll in for another touchdown, but the Ram defense stiffened, forcing a 4th-and-goal from the seven yard line.

That's when Smithers found Camden Smith in the corner of the endzone. With Fuhrey all over him, Smith hauled in the over-the-shoulder pass and got one foot down for the apparent score.

But on the other side of the field, a yellow flag said otherwise. The Warriors were called for an illegal shift, their receivers didn't come set, and the points we're wiped off the board.

Two Ram drives later, Burke hit Connor Barton behind the Canton secondary for a 52-yard touchdown strike down right down the Wyalusing sideline.

The extra point was blocked, but the game was knotted up with 4:09 left to play.

Wyalusing them forced Canton into a 3-and-out, getting good field position on their own 49-yard line with under three minutes left in the second quarter.

From there, they methodically worked their way down field with Morrison hauling in three catches for 39 yards down to the Canton nine-yard line.

From there, Burke hit God for a touchdown with 15 seconds left to take a 19-13 halftime lead.

Both teams struggled offensively in a scoreless third quarter.

The Warriors only picked up one first down while the Rams turned it over on downs once and punted on their first two possessions.

Late in the third, Burke hit Cameron for what looked like a scoring strike, but Cameron tripped into his own teammate inside the five yard line and fumbled the ball. It was recovered by Uriah Ballie, who also had an interception in the first half, to give Canton the ball deep in their own territory.

Three plays later, though, Canton gave it away as Mikey Wilcox recovered a Smithers fumble.

Deep in Warrior territory, Canton dug in, forcing a 4th-and-nine from the 10 when Fuhrey made something out of nothing and hit Burke in the back of the endzone.

The point after was no good, but Wyalusing had what looked like a commanding lead with 9:41 left in the game.

Canton would strike back, though, as Smithers hit Ward three times in the ensuing drive. The first time was for 31 yards and the final time was for a 13-yard scoring strike with 8:03 left in the game.

Smithers found Ward for the 2-point conversion to cut it to 25-21.

Canton would force a 3-and-out, but on their ensuing drive, Morrison was picked off by Martin on a tipped pass to turn it back over.

Wyalusing wasn't able to score. Burke fumbled at the Warrior 5-yard line and it was recovered by Canton's Nick May, but did run time off the clock.

With less than three minutes to play, Canton had to go 95 yards to take the lead.

That's when Smithers went back to his favorite target, Ward, hitting him for 27 yards on third down, then 23 yards on second down, where Ward made an off-balance, one-handed catch.

After a 12-yard reception by Ben Knapp, it looked like Canton was in business at the Wyalusing 30-yard line. But, an incompletion was followed by a Morrison sack to make it fourth and 22 at their own 43. Back-to-back false start penalties pushed Canton back inside their own territory, needing 33 yards for a first down.

Once again, Ward came up big as Smithers found him again behind the defense for a 43 yard pass down to the Ram 10-yard line with 10 seconds to play.

Smithers rumbled to the 5-yard line, but barely got out of bounds with three seconds left for one play.

On the final play, Smithers ran right and looked for Ward, but his pass was batted down at the goal line as Wyalusing preserved the win.

There was a flurry of emotions for Wyalusing late in the game.

"We got a big sack, I was really excited," said Morrison. "I see they went deep and it was down to the wire, but these are the games you have to win. This was a game we knew we had to pick up."

The Rams circled their first two games of the year — wins against Sayre and Canton — as both could be future district opponents.

"We really wanted to get two wins in our district knowing we might have to face them later," Morrison explained. "Get confidence going into the meat of our schedule. We've got some Large School NTL teams, it's going to be tough."

This was a moral victory of sorts for Canton.

"We drove 90 yards there in the end and Timmy Ward made some great plays," said Sechrist. "I just told them it's the little things, that touchdown that got called back. Just the small things. It would be nice to have a win but we're close, we're close."

They will host Bucktail next week.

Wyalusing will welcome North Penn-Mansfield for their home opener and Clark knows they have a lot of work to get ready for the high octane Panthers.

"Our kids are capable of being a district-caliber football team when they want to be," he said. "When they clean their mistakes up and play as a unit. But, time and time again, we go back to forgetting our assignments, and our alignments are off, and we're just undisciplined right now."

Regardless, he feels they aren't done with the Warriors this season.

"They took us as far as we could go and it was anyone's game," said Clark. "I'm sure we'll probably see them again down the road."